To celebrate the opening, the college presented a lecture by Jeffery Hobbs. Mr. Hobbs, who is of Cherokee and African descent, has been a highly regarded member of the Native community in Middle Tennessee for many years. He attended Middle Tennessee State University majoring in History and Native American Studies and while there he served as Vice President, and President of the Native American Student Association. He has spoken at many different schools and universities about Cherokee history and culture. One of his prime interests of study has been the relationship between Native Americans and African-Americans from the point of contact to present day. Mr. Hobbs is also well known as a drummer and singer of Native American powwow songs, and travels throughout the country singing at various powwows, and cultural events. 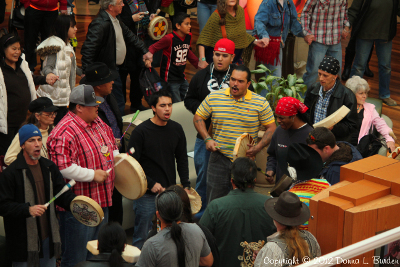 Mr. Hobbs took the time to speak to Native History Association board member Joseph Cummins, who sings and drums with Mr. Hobbs on a regular basis, about his presentation, which took place in February, 2013. Please note that the IndiVisible exhibition is no longer on display at Martin Methodist College.

JC: What will you be talking about at the IndiVisible opening event on February 18th?

JH: Basically I'm going to be talking about the history of African people and natives since first contact in the Americas to the present. I'll tell some stories, some family experiences. I owe everything to my grandparents in regards to making me the person I am today and shaping my opinions and beliefs about having mixed ancestry. I'll also talk about my own experiences from the perspective of a person with African/Native ancestry and mixed descent.

I'll address the question "What is a black Indian?" and how people of different ethnic groups perceive it now and in the past, and I'll also talk about the Cherokee freedmen, what they were and how they came about.

The presentation will be more of a free form style, basically how I feel at the moment, and I'll also open up the floor for discussion and questions.

JC: How do you feel about speaking in Pulaski, considering it's history as the birthplace of the Klu Klux Klan?

JH: I am honored to speak at this event. It's amazing that this kind of exhibit in Pulaski is even possible, because of the history of that place. It's a good thing that times have changed and it's now acceptable to expose people of that area to history and topics like this.

I'm also honored to be asked to speak because it's the first Smithsonian exhibition at Martin Methodist College, and the first location in Tennessee to get this exhibit.

JC: What do you think about recognition efforts like African American History Month and Native American Heritage Month? Some people say they try to compress long and complex subjects into a short time, and they give the impression that those histories are somehow separate from American history, while others say at least a little bit of recognition is better than none. Would you want to weigh in on that?

JH: I feel an inclusive history is best when it comes to the history of the Americas. People need to be aware of the various points of views, correlations, and stories. History as presented in the schools seems to be more like a treatise for the making of young patriots, devoid of critical thinking.

I understand the pros and cons of setting aside a month for the recognition of a particular ethnic group in society. I feel in the absence of an inclusive history, setting aside a month will have to do for the moment. However, I do feel that over time, these recognitions and observances have become stagnant. We are presented with the same stories and images year after year. There is so much more to the American story than Martin Luther King Jr., Sitting Bull, Frederick Douglas, and Geronimo.

These months should be filled with honest and open discourse about how minorities have shaped, been treated, and perceived within the context of the American story.

Ultimately, my vision is similar to that of Carter G. Woodson, the person responsible for initiating Black History Month. I would love to see a time when there is no need for a Black, or Native History Month, but that it is included in the common curriculum and study of history.