On The Passing of Mary Brave Bird (Crow Dog) 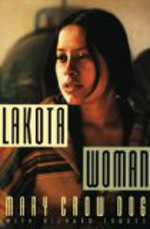 On February 18, 2013, my husband, Mark, came to the doorway of our family room and told me he had just read that Mary Brave Bird (Crow Dog) had passed from this life on to her next journey. I was filled with disbelief and thought it must be a horrible rumor. I began to search the Internet and could find nothing. Finally, I sent an instant message to Mark's cousin, since she lives on Rosebud. She quickly responded, confirming that it was true. Since that day I have searched daily for any tribute, obituary listing and any thing that may memorialize the death of someone who I saw as an inspiration.

As a child I can remember watching news clips on television about the American Indian Movement (AIM) and their struggles during the 70s. It made impressions on me that I would only come to fully realize as I grew older. In the early '90s I read a book called Lakota Woman, a memoir of the life of Mary (Brave Bird) Crow Dog. When they made a movie about Mary called Lakota Woman: Siege at Wounded Knee (based on the book) I watched it. I was completely moved by Mary's bravery and determination to make a difference for Native Americans. In the mid 90s I was presented with an opportunity to assist in collecting coats, clothing, food and other needed items to be delivered to the Indian Reservations in South and North Dakota. Initially, I thought I was only assisting in gathering these items, but it was meant for me to travel with a small group to deliver them.

Country music artist Ricky Lynn Gregg, months before, had played a show near the Rosebud Reservation. His discovery of the deplorable living conditions by the majority of Lakota people living on the Rosebud gave him the idea to begin with a blanket drive. With moderate success, he along with Billy Barrett and a few others were encouraged to do something more. Ricky, leading the way of what would become known as the Trail of Hope, gathered a group of individuals and business owners to assist in collecting relief items for the Lakota people. With several Semi trucks and trailers and one Prevost bus we headed on our journey, zigzagging our way across the country to Indian Reservations in South Dakota and the southern part of North Dakota.

The trip was filled with many learning experiences for me; however, when we arrived at the Rose Bud Reservation we were presented with the opportunity to meet Mary Brave Bird Crow Dog. Because I had read her book and seen the movie that I found very inspiring, I was elated to have the opportunity to meet her. Prior to that day, she was famous to me. She was not famous in the way most would consider someone famous, but she was famous to me because, as a woman with strong Indian ancestry, she had worked hard to forward Indian rights and women's rights and to bring to light the traditions of her people. The Trail of Hope trip was being documented with a film crew and while Mary was being interviewed I sat and listened to every word with tears streaming down my face. She was a heroine. She didn't have a cape flowing in the wind on her back and she wasn't perfect. She was a Lakota woman, a daughter, single mother, and wife (at times), with her own daily struggles. She battled inner demons, she worked to provide for her family and she fought to make a difference for her tribe and all Native Americans. She inspired me to be a better woman. She gave me an understanding that we can all do something to make a difference even amidst our imperfections.

Fifteen years after her memoir Lakota Woman, Mary released another book entitle Ohitika Woman. It detailed her life experiences up to 1992 and continued to share ancient myths and traditions of the Lakota people and added detail to what was written in her earlier book.

From the early 70s Mary spent her life as a woman warrior. In 1972 at the age of 16 she joined the American Indian Movement (AIM) and participated in the Trail of Broken Treaties march on Washington D.C. that lead to protesters occupying the Bureau of Indian Affairs building. During this time Mary met Leonard Crow Dog, a Lakota medicine man and they married the following year. In February 1973 at the behest of traditional Lakota leaders, AIM leaders and other Native Americans, including Mary and Crow Dog, took a stand at Wounded Knee; a place where in 1890 the U.S. cavalry massacred hundreds. Wounded Knee, located on the Pine Ridge Reservation, was suffering at the hands of a corrupt leader named Richard "Dickey" Wilson, the "elected" tribal chairman. The siege lasted 71 days and gave this country a window to see some of the treachery occurring. The AIM movement assisted in giving Native communities strength through hope and perseverance. Mary felt the organization gave her life purpose without which she lived in hopelessness. It didn't take away the reality of poverty, despair, alcoholism, domestic violence or joblessness on the reservations; however, it did provide hope of a better day.

Mary inspired me to be an Indian activist. I am grateful for the times I have had the opportunity to do what I could to forward awareness. I have spent the last 20+ years trying to be more like her, being an Indian activist against grave desecration, gang problems on the reservations and other issues Native Americans face, and educating the general public who are for the most part oblivious to Native Americans having any issues.

As I sit here today I know there is more to do, and that I also get caught in my own personal struggles and lay down the fight sometimes, but that's okay because we all have a path to walk and we can pick up the fight to help our brothers and sisters again. When I returned to Tennessee from the Trail of Hope trip, I wrote Mary a letter telling her how moved I was to have met her. I have never seen or spoken with her since. I hope she received the letter but if she didn't I hope she passed onto her next journey knowing what an inspiration she was to many and what an inspiration she will be to future generations. My prayers go to her and all those who knew and loved Mary Brave Bird (Crow Dog).