(From History, Myths, and Sacred Formulas of the Cherokees

Some people in the south had a corn mill, in which they pounded the corn into meal, and several mornings when they came to fill it they noticed that some of the meal had been stolen during the night. They examined the ground and found the tracks of a dog, so the next night they watched, and when the dog came from the north and began to eat the meal out of the bowl they sprang out and whipped him. He ran off howling to his home in the north, with the meal dropping from his mouth as he ran, and leaving behind a white trail where now we see the Milky Way, which the Cherokee call to this day Gi'li'-utsun'stanun'yi, "Where the dog ran." 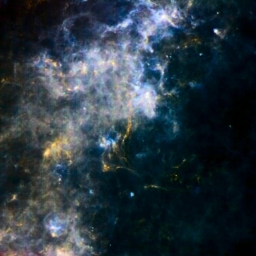 Stars being born in the Milky Way galaxy