The Irish Potato Famine And The Choctaw Relief Effort 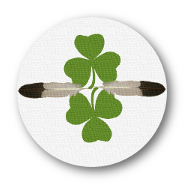 The "Irish" potato actually originated in the Andes of South America where Native people have been cultivating it for at least 4,000 years, eventually developing about 3,000 varieties by the time of the Spanish invasion. The Spanish then introduced it to Europe, where it was grown as a garden novelty but met resistance as a food crop, possibly because it's classified in the same family as the poisonous nightshade, because the Europeans considered it ugly, it's not mentioned in the Bible, and apparently it gave some people excessive gas. Eventually it made it's way to Ireland, possibly in 1588 on destroyed ships of the Spanish Armada found washed up on the coast by Irish peasants. By the end of the 17th century it was the country's staple food.

After the Irish enthusiastically accepted the potato it spread to the rest of Europe as a food and became part of the new wave of appetizing and nutritious crops, first developed by Native Americans, that were partly responsible for a boom in the population of Europe after their post-1492 introduction. The increase in population in areas that began cultivating the potato was so dramatic it may have added to the reputation of the plant as an aphrodisiac. For example, by 1845, less than a century after it was widely adopted as a food in Ireland, the country's population had tripled and during this time 1.75 million Irish emigrated to the Americas.

Although the potato was developed by Native people in South America, the Europeans get credit for introducing the plant to North America as a food crop. Several species grew wild here but it wasn't cultivated, although Native people in Mexico and the American Southwest may have been about to begin cultivation when their efforts were interrupted by European contact.

Unfortunately, in Ireland only a few varieties of potato were grown and in 1845 a fungus known as potato blight attacked the crop. The entire country's harvest failed for 2 successive years causing a severe famine that killed more than a million people and forced another possible 2 million to immigrate, with 500,000 coming to the United States by 1850. The aftereffects of the famine contributed to Irish immigration to the U.S. into the 20th century.

In 1847, only sixteen years after having been "removed" from their homeland in the southeastern United States and experiencing starvation and other deprivations, a group of Choctaw raised $710 dollars and sent it to Ireland to aid in the famine relief efforts. This was an amazing amount of money for the time and circumstances. In recognition of the Choctaw's generosity, in 1992 Action From Ireland, a Dublin-based human rights group, sent eight people on a 500 mile walk retracing the Choctaw Trail of Tears, from Oklahoma back to the Choctaw homeland in Mississippi, in a fund-rasing effort for famine relief in Somalia.

So have a happy Saint Patrick's Day, and if you're Irish, kiss a Choctaw.

The History and Social Influence of the Potato - Redcliffe N. Salaman