The Woodland Period began about 3,000 years ago. Many aspects of daily life during this time were not much different from those of the preceding Archaic Period. Houses, tools, clothing, and foods were similar. But there were changes which definitely distinguish the Woodland era from the earlier period. 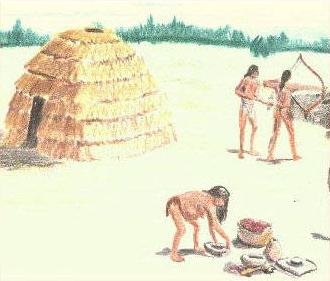 The major change was in the way the Woodland Period People obtained certain foods. They began to cultivate plants such as sunflowers and chenopodium, planting and tending the crops as they grew. Cultivating these plants, instead of simply gathering them in the wild, led to a more settled way of life.

The bow and arrow replaced the spear-thrower during the Woodland Period. The Woodland version of the bow and arrow was probably similar to the weapon used by Southeastern Indian nations of the Historic Period. Black locust, ash, and Osage orange made excellent bows. Bowstrings were made from twisted strips of stretched buckskin. The arrow shaft was made from cane, with the nock cut next to a joint in the stem to prevent the shaft from splitting. Arrowheads chipped from flint were attached to the shaft with animal sinew and a glue made from deer antlers. Indian men began using the bow as young boys, and by the time they reached adulthood they could shoot arrows with great accuracy and force. The weapon was highly accurate at a range of forty yards, and arrows could penetrate oak trees as thick as the calf of a man's leg. 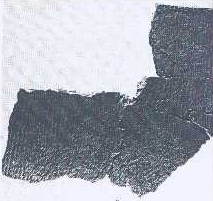 The use of pottery became widespread at this time. Woodland Period potters used clay mixed with limestone. They used the coil method to manufacture their pots. Long strips of clay wererolled up and coiled into a cone shape for the bottom of the vessel. Then additional rolled strips were added, one coil at a time until the pot was completed. The walls were then scraped smooth. Early Woodland Period pottery was decorated by beating the moist surface with a paddle wrapped with a rough fabric or cord. This roughened the surface and made the finished pot easier to hold. Later styles were decorated by stamping designs on the surface with a carved paddle, a technique still used by the Cherokee in historic times. The pot was dried in the sun, and then placed in a hot fire for several hours.

Long distance trade, which began during Archaic times, increased during the Woodland Period. In Middle Tennessee, more objects were being made with "exotic" materials from places like the Rocky Mountains and the Great Lakes.

In the early Woodland Period, the People buried their dead near their houses in the village. Later on, burial practices became more elaborate. For some people, possibly tribal elders or leaders, monuments were constructed by piling basketfuls of dirt over the burials, making earthen burial mounds. Sometimes the burials were placed in log tombs and then a mound was built over the tomb. Burial offerings of food, tools, utensils, and other personal effects were placed in Woodland Period burials. 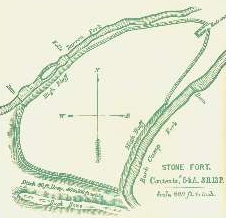 Woodland Period Indians also built large ceremonial structures out of earth. In some areas, huge effigy mounds, in the shape of animal or human figures were built. Sometimes these were enclosed by low earthen walls, which surrounded areas of several square miles. At other sites, earthen walls enclosed a space with no other structures built inside. These places were used as ceremonial centers. Old Stone Fort, a Woodland Period site about 45 miles to the southeast of Nashville, is an example of this type of ceremonial enclosure. This 50 acre site is preserved as a Tennessee State Archaeological Park and is open to the public. 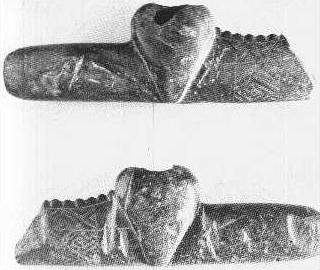 Back:
The Archaic Period
Next:
The Mississippian Period