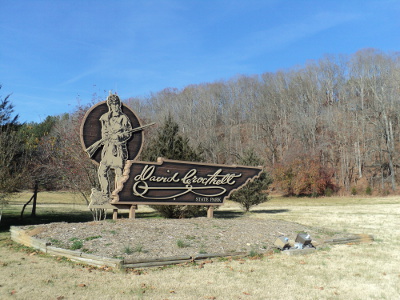 David Crockett State Park in Lawrenceburg, Tennessee is named for the Tennessee frontiersman who fought and died at the Alamo in Texas. Born in northeast Tennesse in 1786, Crockett moved to Lawrence County in 1817, where he served as a justice of the peace, a militia colonel, and a state representative. He also built a mill on Shoal Creek, which runs through the park. After the mill was destroyed in a flood in 1821 he moved to West Tennessee and was elected as a U.S. Representative in 1826. 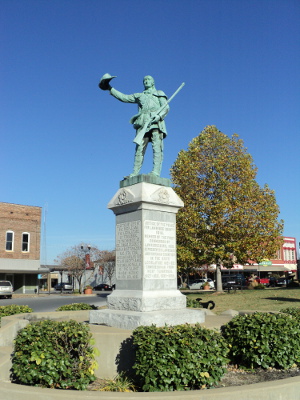 Statute of David Crockett, Indian Removal Act opponent and hero of the Alamo, on the town square in Lawrencburg

Crockett had served under Andrew Jackson in the Creek War in 1813-1814. Jackson was elected President in 1828, and Crockett supported him politically at first, but Crockett soon broke with Jackson over his administration's Indian policy. In 1830 Crockett was a leading opponent of Jackson's Indian Removal Act, calling it "oppression with a vengeance", which resulted in Crockett's defeat in the next election later that year. Crockett ran again, and won, in 1832 as an Anti-Jacksonian in a newly created district.

Crockett lost his next re-election bid in 1834 as a result of his opposition to Jackson. In November, 1835 he left Tennessee to fight for the Republic of Texas and met his fate defending the Alamo on March 6, 1836. 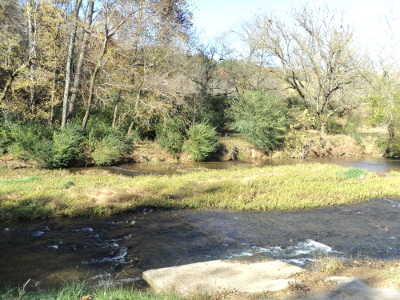 The ford at Shoal Creek in Lawrencburg, Tennessee, used by the Bell detachment in 1838

In 1838 a detachment of Cherokees lead by John Bell, traveling west on the Trail of Tears, forded Shoal Creek and passed through the area that later became David Crockett State Park. Several sections of the original road the Cherokee used are still intact and included in the "Trail of Tears Interpretive Retracement Trail" at the park. The park received a Certificate of Merit Award from the Tennessee Historical Commission for it's work to preserve and interpret the trail. 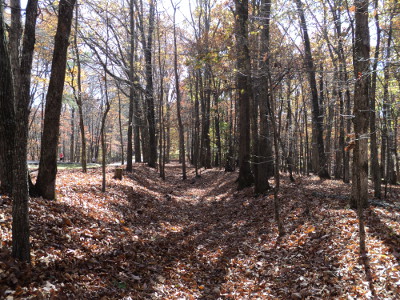 Trail of Tears intact roadbed at David Crockett State Park, used by the Cherokee in the Bell detachment in 1838 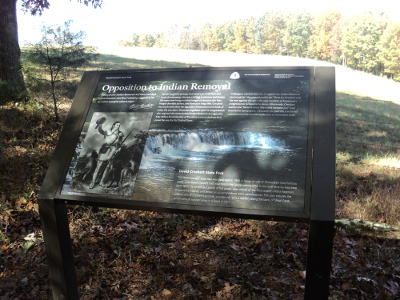 David Crockett State Park is open every day from 7 am until dark. It has a restaurant, fully furnished cabins, camping, hiking, biking, fishing and many other recreational facilities. The Visitor Center Museum depicts the life and times of Crockett as a pioneer, soldier, politician and industrialist. Currently, none of the museum exhibits, which were developed in the 1970's, discuss Crockett's opposition to the Indian Removal Act or the Trail of Tears, but plans are being made to add an exhibit on this important aspect of the legendary Tennessean's life. 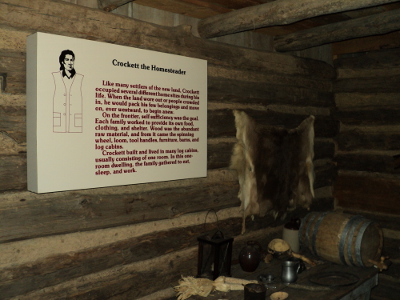 One of the Crockett exhibits in the Vistitor Center Museum

The Trail of Tears In Lawrenceburg, Tennessee:

Shoal Creek Ford: The ford is on Old Waynesboro Highway, about a half-mile west of Lawrenceburg on Highway 64, very close to the entrance to David Crockett State Park. A small park called Hope Springs Park overlooks the site. Follow the link below for a Google map and just put your location in the "A" box to get directions.

David Crockett State Park: The park is located at 1400 West Gaines in Lawrenceburg, TN, not far from the Shoal Creek Ford. Follow the link below for a Google map with directions from the the Shoal Creek ford to the Trail of Tears segment.

Driving The Trail of Tears From Interstate 65 To Pulaski and Lawrenceburg:

It's possible to drive almost the entire route taken by the Cherokee detachment lead by John Bell from a point near Interstate-65 to Pulaski, Tennesse and then to Lawrenceburg, Tennessee. The Benge detachment also followed the same route for a short distance through Pulaski. The first map below gives directions for driving the original Trail of Tears route from I-65 to the Pulaski Trail of Tears Interpretive Center. The second map gives directions from the Pulaski Interpretive Center to the intect Trail of Tears roadbed visible in David Crockett State Park in Lawrenceburg. Click the Google Map links below for details.

The Trail of Tears From I-65 To Pulaski, Tennessee - Google Maps

The Trail of Tears From Pulaski To Lawrenceburg, Tennessee - Google Maps

A Narrative Of The Life Of David Crockett, Written By Himself - Free Google eBook