After his Indian Removal Act was passed in May of 1830, President Andrew Jackson invited the Chickasaw Nation to a treaty council to be held the following August in Franklin, Tennessee. During their stay, the Chickasaw delegation met Jackson in the Franklin Masonic Hall, a National Historic Landmark which still stands at 115 2nd Ave South in Franklin. 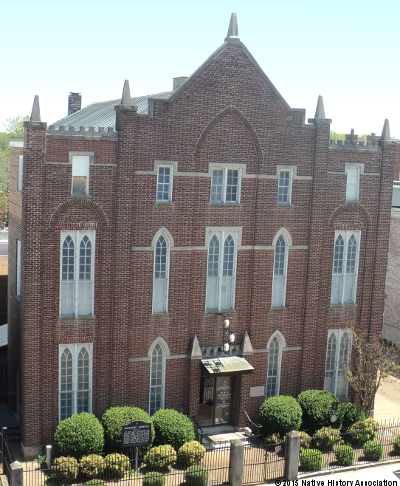 Franklin Masonic Hall. This is the original building where a delegation from the Chickasaw Nation met Andrew Jackson in 1830.

The Choctaw Nation originally proposed the council and requested that Jackson meet with them in person. The Choctaw backed out at the last minute because of internal disagreements, but Jackson did travel to Franklin to meet with the Chickasaw leaders. This would be the first treaty negotiation under the Removal Act and a successful outcome was important to the President, who was a charismatic and influential figure among the Chickasaw. Some of the older minkos (chiefs or headmen) had served under Jackson's command at the Battle of New Orleans and the Creek War, during the War of 1812. They called him "Sharpe Knife".

President Jackson met and welcomed the Chickasaw delegation when they arrived in Franklin on August 20, 1830. The council formally began on August 23, 1830 in a church a few blocks from Eaton's house. Jackson didn't attended the proceedings in person, leaving the negotiations to Commissioners Eaton and Coffee. The commissioners made a brief opening statement, declaring that the President felt like a parent towards his "red children". Then they read a "talk" written by Jackson himself.

Jackson's statement began by addressing the Chickasaw leaders as "Friends and Brothers". It went on to admonish them to disregard "the attachment you feel for the bones of your ancestors" and to "forget the prejudices you feel for the soil of your birth and go to land where you can preserve your people as a nation." Arguing that his own "forefathers left their lands beyond the great waters and sought a new and quiet home in distant and unexplored regions", Jackson conveniently overlooked the fact that those so-called "unexplored regions" included the very land that he was now asking the Chickasaws to give up.

After Jackson's statement was read, the council adjourned to allow the Chickasaw leaders time to consider the President's words. Eaton and Coffee reconvened the council three days later, at 10:00 am on August 26th.

An Act Of Unparalleled Usurpation 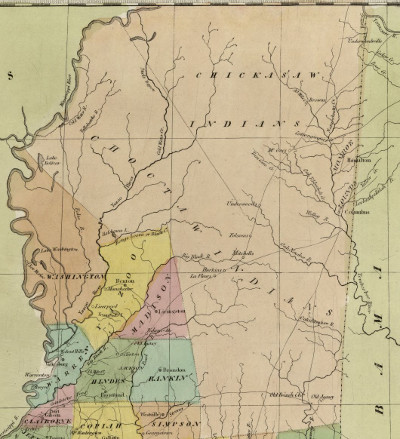 Chickasaw and Choctaw land in Mississippi, 1835

The reply to Jackson's "talk" was delivered by John McLish, Secretary for the Chickasaw Nation. It included an acknowledgment of the delegation's hospitable treatment by the President, the commissioners, and the people of Franklin. It went on to point out that the Chickasaws had held ancient title not only to their remaining land in Mississippi and Alabama, but also a much larger area in Tennessee and Alabama that they had already sold to their "white brothers, to suit their views and interests, until we have but a small home left, that is barely sufficient to subsist upon while living, and to bury our bones when we are dead." The Chickasaws also reminded the commissioners that they had welcomed their "white brothers" with friendship, and subtly alluded to the unfairness of the situation they were being forced into: "We met them, took them into our wigwams, warmed them, fed them, and treated them like brothers; and now we think it extremely hard, at this advanced period of our lives, to be informed that we must, from necessity, if we wish to preserve ourselves as a nation - that we must seek a home in an unknown region of the West."

One of the main issues of Indian Removal was whether individual states had the right to ignore the sovereign status of Indian nations within their borders, and the threat of oppressive, anti-Indian state law was the main tool used by the federal government to extort Removal treaties. Mississippi had extended it's laws over the Chickasaw Nation in 1829, and it was just a matter of time before Alabama would do the same. Jackon's message to the Chickasaw leaders at the Franklin council had warned them "to these laws, where you are, you must submit; there is no preventive, no alternative." The Chickasaw reply emphatically objected, stating that they viewed the extension of state law over Chickasaw territory as "an act of usurpation on their part, unwarranted by the Constitution of the United States and the treaties that now exist, unparalleled in history", and also included the observation that "the citizens of the State of Mississippi and Alabama are perfectly aware, that by the extension of their laws over us it would not benefit us one cent, but effect an object so desirable to themselves; that is, to drive us from our homes and take possession of our lands."

The Chickasaw leaders concluded their reply with an expression of faith in President Jackson's good intentions, and offered to consider an exchange of land if they could first examine what they would receive: "Candor towards you, and justice to ourselves, compel us to say to you, that we cannot consent to exchange the country where we now live, for one that we never have seen."

Eaton and Coffee adjourned the council and consulted the President. At 5:00 pm that evening they reconvened and delivered the response on behalf of the United States: The states had the right to extend their laws over all people in their territory "without the leave, consent or interference of the President or Congress", the "great father" (Jackson) couldn't stop this, and the Chickasaw should make a deal now, before both the land and money appropriated for Removal were gone and the opportunity lost - "Misery or happiness must and will follow on the decision you shall make. Consider and act, then, before it be too late." The Chickasaw's request to inspect the land they would receive would be accommodated as a stipulation in the treaty giving them the right to receive payment or other lands "obtained from neighboring tribes" if they weren't satisfied with what they found on arrival beyond the Mississippi. 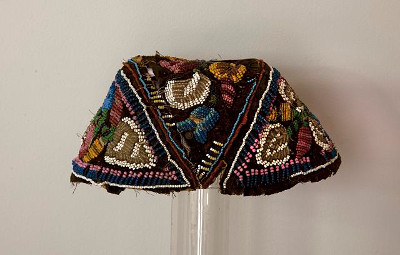 At the conclusion of Eaton and Coffee's talk, the Chickasaw leaders expressed their confidence in the President, their conviction that he acted in their interests, and that "they had never known him to speak with two tongues". They then retired to consider what had been said.

The next day, August 27, at the request of the Chickasaw leaders, Jackson met with them at the Franklin Masonic Hall, which was located behind Eaton's house. McLish addressed a brief statement to Jackson, saying "your words have sunk deep into our hearts" and after due consideration "we are now ready to enter a treaty, based upon the principles as communicated to us by Major Eaton and General Coffee." Jackson replied that he had "traveled a long distance that he might see them face to face", and he now had to return to Washington and would leave the details of the negotiations to the commissioners.

The Treaty Is Signed

Over the next 3 days annuities, support for Chickasaw education, Removal expenses, and other related details were worked out. On August 31 the treaty was signed. The Chickasaw agreed to exchange their remaining land in Mississippi and Alabama for land "West of the territory of Arkansaw", with a stipulation that they could examine the land beforehand. If they didn't find suitable land, the treaty would be null and void. A supplemental treaty concerning other details was signed the next day, September 1, and "thereupon, the council broke up."

Results Of The Treaty

The Chickasaws sent several delegations west of the Mississippi to look for land over the next two years, but nothing suitable was found. In the meantime, the signing of the 1830 Franklin treaty caused a land rush of white squatters anxious to stake their claims before the Chickasaws had even left. By 1832 the Chickasaw Nation was being overrun, even though the Franklin treaty was supposed to prohibit such intrusions. Article 3 extended the protection of the United States to the Chickasaws, but the federal government did nothing to stop the invading squatters - apparently Jackson had let his blade grow dull, at least when it came to protecting Chickasaw land. 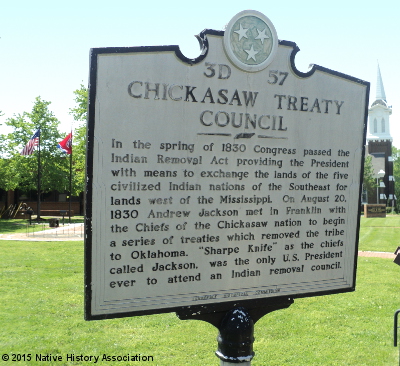 In January, 1832, Alabama passed legislation claiming authority over all Indian land within the state's borders. The governor of Mississippi had temporarily suspended enforcement of state law regarding Indians at the request of the federal government, a specific provision of the Franklin treaty, but the state continued to assert it's authority over Indian land in the legislature and the courts.

Since the Chickasaws found no suitable land in the west, the Franklin treaty was considered null and void and was never ratified by Congress. In October, 1832, President Jackson sent John Coffee to the Chickasaw Nation to negotiate a new treaty. Coffee met 65 Chickasaw leaders, including Ishtehotopa, Tishomingo, Levi Colbert, and George Colbert, at the Chickasaw council house on Pontotoc Creek, near present day Tupelo, Mississippi. On October 20, the Chickasaw leaders signed the Treaty of Pontotoc Creek with the United States, agreeing to sell their remaining homeland in Mississippi and Alabama.

The Chickasaws became dissatisfied with the Treaty of Pontotoc Creek, believing John Coffee had misrepresented the terms during the negotiations. In 1834 they sent a delegation to Washington, D.C., to amend the treaty. Levi Colbert, then 75 years old, began the journey but became ill and died. Before his death he dictated instructions for the delegation, which included his brother George, who had also been present at the Franklin treaty council. George Colbert and the rest of the delegation then traveled on to Washington and negotiated the desired amendments.

In 1837, under the provisions of the Treaty of Doaksville, a treaty between the Chickasaw and Choctaw Nations, the Chickasaw bought a section of Choctaw land in Indian Territory. The people whose allegiance and friendship arguably prevented the destruction of fledgling Nashville and the other Cumberland settlements, and helped shape the map of the southeast to the benefit of the United States, finally left the soil of their birth and removed to the west. 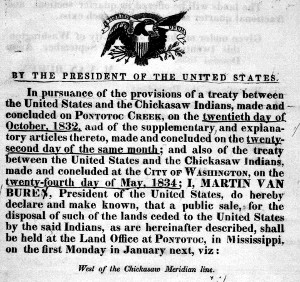 The Chickasaw Treaty Council historical marker is located on the grounds of the Williamson County Museum at 611 Main St Franklin TN, 37064, near the intersection of Main St. and Columbia. Click Here For A Map and directions - Just put your location in the "starting point" box for directions. Admission to the Museum is free and the hours are 8:00 am - 4:30 pm. M-F.

The Franklin Masonic Hall is at 115 2nd Ave South Franklin TN, 37064. Click Here For A Map and directions - Just put your location in the "starting point" box for directions. There is free parking in the garage across the street, but the Hall currently isn't open to the public on a regular basis.

The Chickasaw and Their Cessions - TNGenWeb