The Noel Cemetery was a large Mississippian burial ground that contained an estimated 3,000 graves, located in Nasvhville, Tennessee, approximately in the area between Granny White Pike and Lealand Lane, bounded on the north by I-440 and on the south by Woodvale Drive. The size of this cemetery suggests that it was the burial ground for a large town or city with a population numbering in the thousands. This was just one of several cemeteries of comparable size in the Nashville area. Smaller village burial grounds typically contained a few dozen graves. Families living on outlying farms usually had small family cemeteries.

Mississippian Indians in Middle Tennessee usually lined their burials with large limestone slabs. They placed slabs on each side, and at the head and foot of the grave, carefully cutting and joining them. The body was placed in the stone coffin face up and fully extended. A stone slab was used as a cover, and a layer of earth, from a few inches to a few feet deep, was spread over the top. This type of burial is called a stone-box grave. Mississippian people in other areas of the Southeast also used this method when easily worked stone was available.

Mississippian burial grounds were usually located in a special area inside the palisade walls of the towns. Some individuals were buried in isolated graves near a house or other building. Sometimes a family would bury a young child in the house floor.

Stone-box graves usually contain burial offerings. Since Paleo-Indian times it has been a Native American custom to place burial offerings with the dead. Many Native American societies believe containers of food and familiar objects provide nourishment and comfort for a person traveling to the spirit world. The Mississippian Indians must have shared similar beliefs and sentiments.

Burial goods placed in the Noel Cemetery graves were rich in beauty and variety. Many of the tools as well as the ornaments were works of art. Pottery vessels were common burial offerings: cooking pots, drinking cups, and water jars molded in human and animal shapes, or decorated with human and animal figures and other designs. Shell beads, pendants, gorgets, pins, earrings, cups, and spoons were placed in the graves. Tools, ornaments, knives, spear points, axes, pipes and statues, made from copper and stone, were also common burial offerings.

The artistic value and unique style of Native American grave goods has always made them sought-after pieces by art collectors and museums. Digging up Indian mounds and graves was once a popular pastime for amateur and professional collectors. In this manner, thousands of burial offerings were taken from the Noel Cemetery. By the early twentieth century the burial ground was completely destroyed - people looking for Indian artifacts had looted every grave. Even the remains of the people buried here were taken away. A large number of artifacts from the Noel Cemetery can be seen at the Tennessee State Museum.

Many intact burial grounds still exist in the Nashville area and other parts of the country. Disturbing Native American graves is illegal now, but the practice continues (see the Cleece's Ferry site). Indian artifacts bring high prices on the national and international art market. This makes some people willing to run the risk of being caught. Currently it's not illegal to own, buy, or sell burial goods. This allows the market for these objects to exist, and as long as money can be made by doing so, looters will continue to desecrate Indian graves. Efforts are under way to pass legislation outlawing the artifact trade. Such laws would reduce the commercial incentive for grave robbing, and help preserve these historically and spiritually important places. 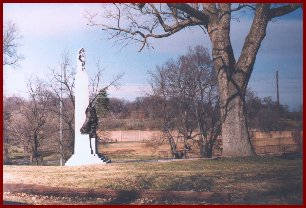 Today, houses cover the area once known as the Noel Cemetery, and I-440 cuts through the otherwise quiet neighborhood. To the west, Brown's Creek, which probably quenched the thirst and watered the crops of those once buried here, has been "filled in, diverted, re-channeled and had heaped upon it just about every indignity that a dream could possibly suffer", in the words of writer James Crutchfield. In 1999, on the northern edge of the Noel Cemetery area, the Battle of Nashville Monument Park was created at the intersection of Granny White Pike and Clifton Lane. The impressive monument, which honors the soldiers on both sides of the Civil War as well as the American soldiers who fought in World War I, was moved here from it's former location and now seemingly dominates the scene.

This small park provides a convenient location to pay your respects to the Noel Cemetery - if you're aware of it. There are no manmade monuments anywhere in the vicinity to the Indian people who were once interred in this ancient sacred ground. But the spirit of the People lives on here - in the trees, the grass, and the earth. Not a spectacular remembrance by some standards, but maybe the most appropriate. In the end, these are the only things that last.