The first bridge in Nashville, which was also the first bridge over the Cumberland River, was opened to traffic in 1823 at the northeast corner of the city's public square, near the location where the Victory Memorial Bridge now stands. Designed by noted bridge engineer Lewis Wernwag, it was a three-span, covered toll bridge constructed of wood and iron, supported by stone abutments on each bank, and two stone piers in the river channel. In the late 1830's thousands of Cherokees crossed this bridge on the Trail of Tears. By the mid-nineteenth century, the new generation of steamboats was too tall to pass under the bridge, so in 1850 the first Woodland Street Bridge was built to replace it. The 1823 Nashville Toll Bridge was then dismantled in 1851. 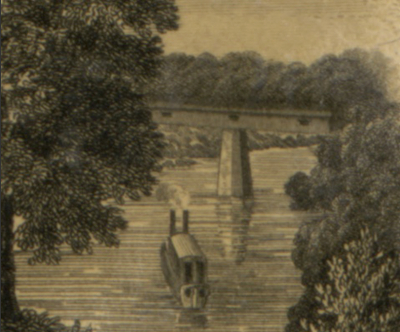 Detail of an illustration from an 1832 map of Tennessee by Matthew Rhea showing the 1823 Nashville Toll Bridge. This is one of the very few period illustrations of the bridge. 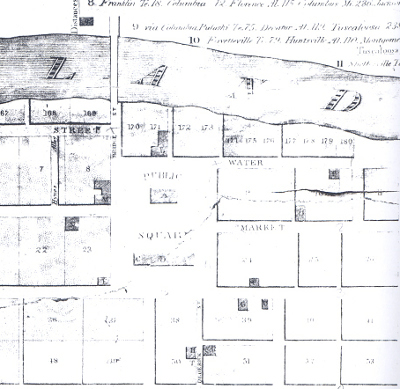 Detail of an 1831 map of Nashville showing the 1823 Nashville Toll Bridge crossing the Cumberland River at the northeast corner of the Public Square.

In 2012 the Native History Association discovered that the west abutment of the 1823 Nashville Toll Bridge still stands on the river bank in downtown Nashville, almost completely intact and in a surprisingly good state of preservation, considering it had been completely neglected for more than 160 years. Since then we have worked with the National Park Service, the Tennessee Department of Transportation, which owns the site, Historic Nashville, Inc., and Save The Cumberland to document, preserve, and interpret the abutment as a significant historical site. It's now a Trail of Tears National Historic Trail Certified Site. 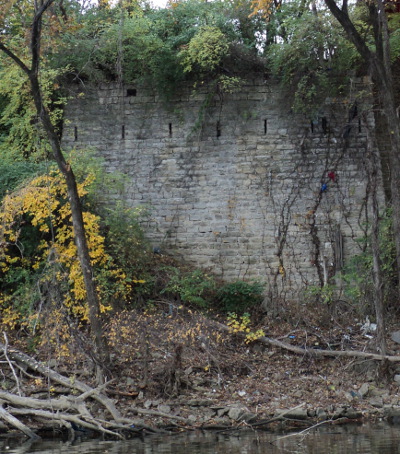 1823 Nashville Toll Bridge Abutment, seen from the Cumberland River in 2012.

The 1823 Nashville Toll Bridge site is located in downtown Nashville, Tennessee, on the Gay Street Connector near the underpass for the Victory Memorial Bridge, at approximately 36.1680989, -86.7773790. The site is also located on the Cumberland River Greenway. Two interpretive panels mark the site, and you can see the top corner of the abutment from the sidewalk. There is metered parking along the street at the site and paid parking lots and garages nearby. It's within walking distance from attractions on 2nd Avenue like BB King's Blues Club, Wildhorse Saloon, and Hard Rock Cafe.

We also highly recommend visiting the Fort Nashborough History Center, located about 1/4 mile away in Riverfront Park, to learn about the early Native history of Middle Tennessee. Fort Nashborough is the site of the first permanent American settlement in the area, and there is a direct connection between the events that took place there and those that eventually led to the Indian Removal Act of 1830 and the Cherokee being forced to cross the bridge here in 1838. 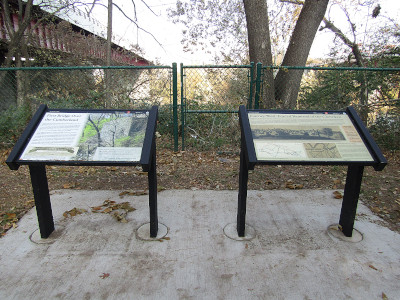 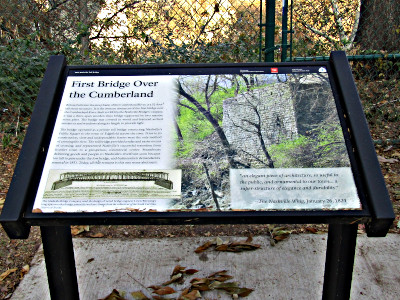 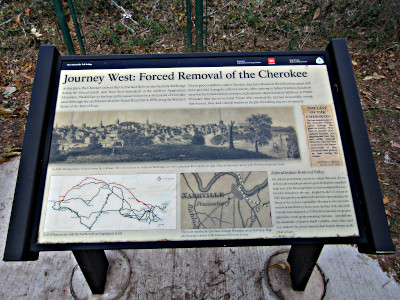 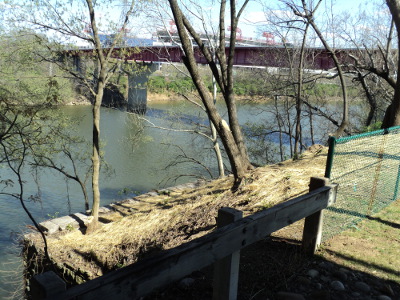 "Progress On The 1823 Nashville Bridge Site"

"The First Bridge Over The Cumberland" - A collection of newspaper articles about the Nashville Toll Bridge, dated from 1818 to 1824. From Nashville History, a blog by Debie Oeser Cox.

"The Colossus of the Schuylkill River" - An article about Lewis Wernwag's most famous bridge in Structure magazine by Frank Griggs, Jr.