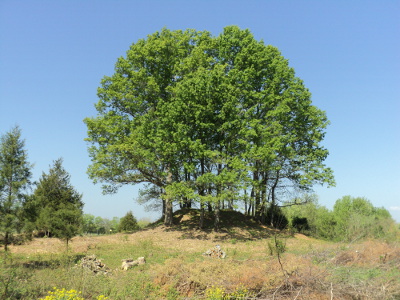 The larger mound at the Glass Mounds Site

The Glass Mounds Site is a Woodland Period site consisting of two existing Native American burial mounds near Franklin, Tennessee. The site has been well known locally for many years, and has been heavily impacted by looting and by excavations done by the Peabody Museum and the Smithsonian Institution in the 19th century. It was originally a large Native town site that contained at least 4 mounds, but phosphate mining in the mid-20th century destroyed most of the site. 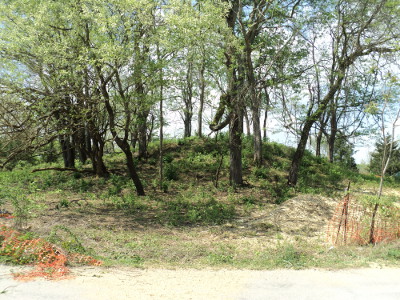 The eastern Glass Mound is smaller but still impressive

In 2001, after acquiring the property where the Glass Mounds Site is located, Southern Land Company announced plans to construct what would eventually be a 2,000 unit housing development called Westhaven. During meetings with members of the local Native community, the Alliance for Native American Indian Rights (ANAIR), the Tennessee Commission of Indian Affairs, and the Tennessee Division of Archaeology (TDOA), the developers made commitments to protect and preserve the site and expressed interest in utilizing it as an educational resource. They also expressed support for getting the site listed on the National Register of Historic Places (NRHP).

During the planning phase for Westhaven, Southern Land Company commissioned an archaeological survey of the entire project area, which included the Glass Mounds. The report from that survey recommended complete avoidance of any ground disturbing activities in a specific area around each mound. The developers honored their commitment to protect the site and followed that recommendation, erecting a construction barrier around each mound. The mounds weren't disturbed during subsequent construction of an adjacent golf course and landscaping maintenance facility.

Through an agreement worked out with ANAIR in 2001, the developers agreed to transfer a conservation easement on the Glass Mounds Site to the Tennessee Ancient Sites Conservancy (TASC), a preservation-minded organization that includes Native representation on it's board of directors. TASC has continued discussions with the developers about the details of the conservation easement since that time. 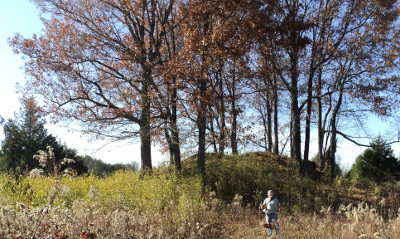 In early 2012, TASC, with the cooperation of the Westhaven Golf Course, which manages the Glass Mounds Site, and with assistance from TDOA, began cleanup efforts at the site. Over the course of the year, a group of volunteers, including several residents of the Westhaven community, removed most of the heavy brush and undergrowth from the area around both mounds. The cleanup effort was covered by local news media and regenerated interest in using the site to interpret the Native history of the area.

In the fall of 2012, representatives from the golf course, TASC, TDOA, the Native History Association, and members of the local Native community met to discuss plans for the Glass Mounds Site. Having the site listed on the NRHP was a point of discussion, and TDOA agreed to take on the task of performing the archaeological testing necessary to establish the site's eligibility.

With the assistance of student volunteers on spring break from the Middle Tennessee State University archaeology program, and working under the supervision of TDOA, the NRHP eligibility testing was done during the week of March 11, 2013. The MTSU students and their TDOA supervisor endured cold, wind, and occasional incoming golf balls to do the first legitimate excavations of the mounds since 1879. 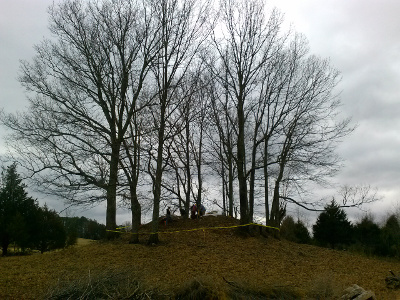 The purposes of the excavations were to identify intact archaeological deposits necessary for inclusion on the NRHP. Square test units were opened on the surface of each mound and manual core samples were also taken. At first the excavations revealed only disturbed soils from the previous excavations, but eventually intact layers of the original mound surface were located. The presence of these intact deposits give the mounds a very good chance to be included on the NRHP.

Once the intact deposits were identified and recorded the excavations were stopped and the archaeologists filled in the test units, packed up their equipment, and went home on March 15th. The application for the NRHP listing might possibly be submitted to the National Park Service, the federal agency that makes the listing decision, by the end of 2013, and if so the decision could be made in the beginning months of 2014.

The Glass Mounds Site isn't included on our list of accessible Native historical sites because the site is currently in an undeveloped condition. The property owners discourage visitors because of the rough ground surface and the danger of being hit by stray golf balls at the larger mound.

The Glass Mounds Discontiguous Archeological District was listed on the National Register of Historic Places as of June 4, 2015.

The Woodland Period - Tennessee Encyclopedia of History and Culture Version 2.0

Return To The Native History Page